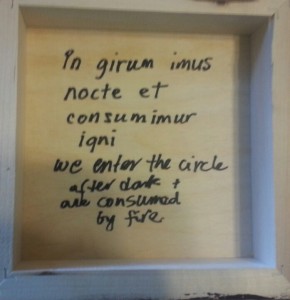 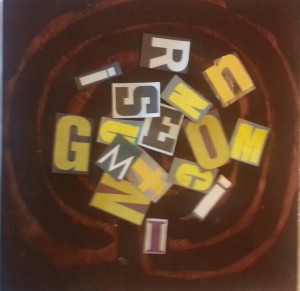 I went to the Capture Photography Festival opening. One of the photos was titled in girum imus nocte et consumimur igni.

As I’d been playing with putting text on a labyrinth painting so it would indicate you’re following the same path out as in, a palindrome seemed a perfect solution.

This phrase means something like, we go into the darkness at night and are consumed by fire.

It’s referred to as the devil’s verse, but if you read consumed as transformed, it’s rather labyrinthian, I think. You might just receive illumination or some consuming desire or a spark of insight in the centre.

You enter in the dark  – your own dark – of unconsciousness.

So I’m playing with it on a small wooden panel board. This is in early stages.

This site uses Akismet to reduce spam. Learn how your comment data is processed.